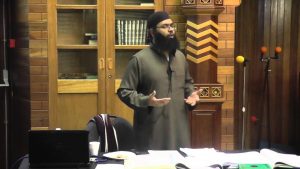 Mufti Mohammed Tosir Miah is an inspirational leader who has changed ordinary people’s lives by creating Darul Ilm Birmingham. He single-handedly took his vision of a madrasah serving the Muslim community and made it into a reality.

Mufti Mohammed Tosir Miah is a graduate of Darul Uloom, Bury, where he qualified as a hafidh, an alim, and a mufti. He studied hadith under Shaykhul Hadith Molana Yusuf Motala. He currently teaches Dawrah of Hadith and the Ifta program at Darul Ilm Birmingham.

He is practically and theoretically conversant and knowledgeable in the field of Islamic studies and theology. He graduated from Birmingham City University with a Bachelor of Arts degree in LLB Law. He completed a Dissertation on Islamic Inheritance Law.

Mufti Mohammed Tosir Miah has delivered lectures all across the world (including the U.K, U.S.A, Australia, Sweden, Italy, Malaysia, Bahrain, Hong Kong, and Trinidad and Tobago) on a variety of topics, such as salah, zakah, fasting, marriage, the khulafa, and the lives of 20 influential imams.

He answers queries from the Muslim community, and his fatwas can be found on daruliftabirmingham.co.uk. He is also the editor of the quarterly magazine Al Mujeeb.